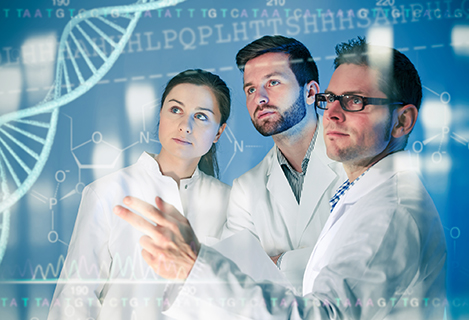 NeuroSpark® Australian-made supplement can be recommended a natural adjunctive treatment alongside other medication for residual symptoms of anxiety, depression, poor memory and foggy thinking, low energy, poor sleep in a range of mild to moderate psychiatric diagnoses, particularly those with co-morbid anxiety. In a recent 8 week low-dose open label clinical trial NeuroSpark® among treatment-resistant patients suffering from depression and anxiety Smith D et al 2017 reported significant improvements in Hamilton Depression Rating scores (HAM-D) with a reduction from 20.0 to 9.6 (p<0.001) and 46% remission rates (HAM-D ≤ 7)1. In addition Clinical Global Impression Severity Scale (CGI-S) and HAM-D middle insomnia reduced significantly (both p<0.05). Prior to the trial all patients were on either stable antidepressant medication or psychological therapy but had demonstrated inadequate response1.

For patients who are intolerant or resistant to prescription anti anxiety and depression medication, NeuroSpark® supplements may provide a natural, effective addition to treatment regimes and are only available to buy online.

NeuroSpark® supplements provides omega-3 docosahaexionic acid (DHA), the longest and the most unsaturated chain fatty acid in the body, with 26 carbons and 6 double bonds in the chain (DHA 22:6 (n-3). The oil in the capsules is from tuna sourced from the unpolluted southern Pacific Ocean and has the highest naturally occurring levels of omega-3 DHA. The oil is minimally processed, so it retains the original triglyceride structure and bioavailability to the body and brain, and is tested to ensure heavy metals e.g. mercury, man-made PCB’s or other contaminants are not present.

NeuroSpark® capsules are a totally natural source of omega-3 triglycerides. they have not been reconstituted through molecular-distillation to achieve a high omega-3 concentration. Omega-3 DHA is not an individual molecule rather a fatty acid chain as part of a triglyceride, therefore altering the omega-3 DHA concentration alters triglyceride structures and we believe this may change bioavailability to the brain NeuroSpark® provides totally natural fish oil and is only available to buy online in Australia. 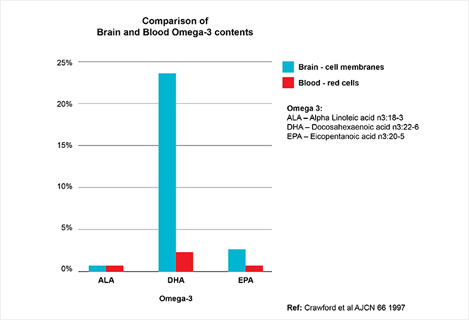 Recommended average daily dosage is 2 capsules providing 260mg omega-3 DHA (W.H.O. guidelines are 200- 500mg omega-3)2. This low dosage is recommended and was found effective in the Smith trial1. However in clinical practice individual optimization may require up to 4 capsules (520mg omega-3 DHA) per day, especially in supporting mood disorders.

Higher concentration of DHA in brain than blood

Omega-3 DHA is used as a structural fatty acid and not as a source of energy in the brain. The brain areas of greatest metabolic activity, the mitochondria, synaptic junctions and inner cell membranes, have the highest concentrations of omega-3 DHA where it is involved in many cellular functions.

Omega-3 DHA is the only omega-3 retained by the brain and comprises 25% of the neural membrane fatty acid structure, in particular the inner membranes, where it has a vital role in normal brain functioning, learning, visual acuity and general health. The beneficial effects of omega-3 DHA supplements may be mediated through enhanced neurogenesis, synaptogenisis and monoamine transmission, modulated neurotransmission via improved cellular fluidity, and anti-oxidant reduction of inflammatory cytokines3,4. Animal studies have identified omega-3 DHA as having a beneficial effect on mood in a manner similar to mood stabilizers and anti anxiety and depression medication. All have a common pathway in reducing the pro-inflammatory omega-6 arachidonic acid in neurotransmitter signaling5.

Clinical observational studies have found higher levels of omega-3 in the blood associated with lower depression and bipolar disorder rates and lower cognitive impairment6. A study of people with mild cognitive impairment, for those with high baseline plasma omega-3 DHA plus B vitamins had significant prevention of cognitive decline compared with placebo; whereas for those with low omega-3 DHA in the plasma the B vitamins offered no benefit. Baseline EPA level did not correlate with a significant prevention of cognitive decline7.

Reviews of clinical trials with omega-3 products show variability of results is characterised by the heterogeneity of the clinical studies in relation to diagnoses and trial populations, measurement scales, omega-3 content and type of preparation, length of supplementation8. While an overall positive effect was measured the heterogeneity limits the strength of evidence. Bionutrients will only comment on clinical trials using NeuroSpark® e.g. Smith D trial1, and on observational studies (no supplementation) and not clinical trials using other products.